The Second World War (1939-1945) was a time of global conflict. The two sides were known as the Allies (led by Great Britain, the USA, France and the Soviet Union) and the Axis (led by Germany, Italy and Japan).

After the war, the United Nations was formed to try to prevent such a terrible war ever happening again. 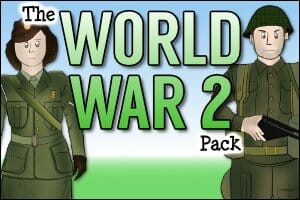 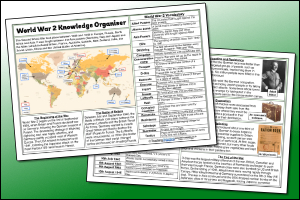 Members of Teaching Packs can download a comprehensive knowledge organiser to accompany this topic. It includes key information that your children can use for reference and research, along with a timeline, vocabulary and more.

This video gives a brief overview of the war.

A graphic biography of Anne Frank.

Sing along with the RAF pilot song from Horrible Histories.

Learn about the roles women took on during World War 2 with Horrible Histories.

The events of World War 2, seen through the eyes of Flossie Albright.

Evacuees David and Tucky are evacuated to the safety of Devon. When a German bomber crashes on the moor, the boys go looking for it…

When mouse Pip’s home (an umbrella shop) is hit by a bomb, she has to find a new home.

Evacuee Willie forms a deep and lasting friendship with his host Tom.

A classic tale of a Jewish family fleeing Germany before the outbreak of World War 2.

A comprehensive encyclopaedia that brings this period of history to life through vivid images.

Tony Robinson guides you through the strange and sometimes disgusting history of World War 2.

The Usborne Introduction to The Second World War

This book shows the effect of the war on people around the world, using hand-coloured black and white photos.