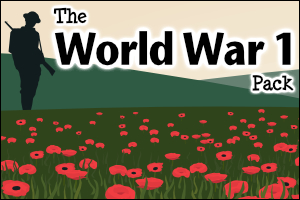 Members of Teaching Packs can download a comprehensive knowledge organiser to accompany this topic. It includes key information that your children can use for reference and research, along with images, a timeline and a glossary.

The Horrible Histories team explain the relationships between the monarchies of Russia, Germany and Great Britain.

The Horrible Histories team publish a humorous magazine in the trenches.

The video gives a comprehensive overview of the war for older children.

What was life like in the trenches of World War I?

The video gives an insight into the conditions that soldiers had to live in.

From an army training camp to the trenches in France, this is the incredible true story of Sergeant Stubby, the dog who served bravely in the First World War, sniffing out gas attacks, catching spies and winning the hearts of his fellow soldiers.

A young soldier’s honest portrayal, told through letters home and a frank journal, of his enthusiasm for the 1914 recruitment campaign, and joining up – followed by the disillusionment and degradation of soldiering in the trenches of World War I.

The story follows twenty-four hours in the life of Private Tommo Peaceful, a soldier in the trenches on the front line.

This is a fascinating flap book packed with essential information about the First World War, from the start of the conflict in 1914, to its resolution in 1918.

You Wouldn't Want to be in the Trenches in World War One!

From sharing your bed with rats and lice to a diet of bully beef, bread and biscuits, discover why you really wouldn’t want to be a soldier living in a trench during World War One.

The Story of the First World War for Children

The Story of the First World War for Children (1914-1918) is a fact-packed information book that relates the unfolding events and the human stories in a way that brings history vividly to life.

The Story of World War One

Full of wonderful, full-colour illustrations and interesting stories, this is a timely addition to existing books on the subject that will interest even the most reluctant readers.

In Frightful First World War readers can discover the the full story: what the ‘Fat King’ did with food scraps and dead horses how sniffing your own pee could save your life in a gas attack why a pair of old socks gave away top German secrets.

Learn about World War 1 using this fantastic book from the DK Findout! series.