The Vikings were incredible sailors, crossing treacherous seas in their longboats. They have a reputation for being fearsome warriors, but they were also traders, taking items such as iron to the Far East, and returning with fabric and spices.

Teach your children about the Vikings using our handy topic guide! 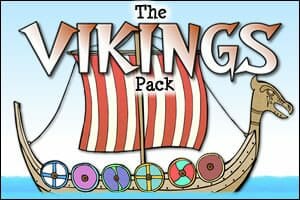 Members of Teaching Packs can download a comprehensive knowledge organiser to accompany this topic. It includes key information that your children can use for reference and research, along with a timeline of key events, a glossary with relevant vocabulary and plenty of illustrations and photos.

Despite being extremely vicious, Vikings really cared about their appearance!

What do you know about the Vikings? Well, the stuff you’ve heard about them may not be true. The Vikings were some of the greatest travellers of their time, and they weren’t always traveling to steal.

Watch a young viking learn how to identify the proper tree to build a ship, nail the craft together, and set off on a journey around Europe.

Norse Mythology Gods & Goddesses. Who are the norse gods and goddesses? What are the powers of the norse deities have? Odin, Thor, Loki, Freyja and more.

Thor’s journey to the land of giants

Thor – son of Odin, god of thunder, and protector of mankind – struggled mightily against his greatest challenge yet: opening a bag of food. How had the mighty god fallen so far? Scott Mellor tells the myth of Thor’s journey to Utgard.

How To Train Your Dragon

In the first How to Train Your Dragon book Hiccup must lead ten novices in their initiation into the Hairy Hooligan Tribe. They have to train their dragons or be BANISHED from the tribe FOR EVER!

Can Hiccup save the tribe – and become a Hero?

Meet the Vikings and enter their enchanting world full of warriors and battles, heroes and heroines, Berserkers, monsters and zombies, and of course, lots of magic.

Gunnar is the son of a Viking chieftain, living peacefully on his family steading with his mother, father and their people – until they are raided by Skuli and his Wolf Men, who raze his home to the ground and take his father’s life. Gunnar swears an oath to avenge his father’s death and save his mother from Skuli – but first he must run to save himself.

Odd and the Frost Giants

Odd’s luck has been bad so far. He lost his father on a Viking expedition, his foot was crushed beneath a tree, and the winter seems to be going on for ever. But when Odd flees to the woods and releases a trapped bear, his luck begins to change. Can a twelve-year-old boy reclaim Thor’s hammer, outwit the frost giants and release the gods?

You Wouldn't Want to Be a Viking Explorer!

Get ready…as an adventurous young Viking living in 10th century Norway, you are keen to join other explorers in search of a new life elsewhere. You will travel vast distances across the Atlantic Ocean in a long ship, to the coast of a new continent. It will be a difficult and dangerous journey – you really wouldn’t want to be a Viking explorer!

All the foul facts about the Vicious Vikings are ready to uncover, including including Viking Gods in wedding dresses, corpses on trial and Death by booby-trapped statues.

Who Were the Vikings?

Why were people so afraid of the Vikings? Why were some buried in boats? These are just two of the many questions tackled in this enjoyable look at the Vikings.