Queen Victoria ruled Britain from 1837 to 1901. During her long reign, many objects and machines we still use today were first invented. These include the telephone, the electric light bulb and the toilet!

With the introduction of railways across the country, people and goods could be moved further and faster than ever before. The British Empire ruled many countries across the world, most of which are now part of the Commonwealth.

Teach your children about the Victorians using our handy topic guide! 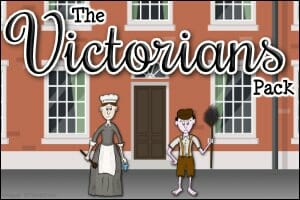 Members of Teaching Packs can download a comprehensive knowledge organiser to accompany this topic. It includes key information that your children can use for reference and research, along with a timeline of events and a glossary with useful vocabulary.

This original footage of the celebrations for Victoria’s Diamond Jubilee is a useful primary source.

All of the Horrible Histories Victorian content in one video!

This short video is a good introduction to Victoria’s life.

Find out what it was like to work in the kitchen of a Lord Braybrooke’s house, Audley End.

This popular book for older primary children is based on the boy who inspired Dr Barnado.

Penelope Tredwell needs a new story for her magazine, Penny Dreadful. When she receives an intriguingletter, she thinks that she has found it…

Hetty is a foundling, left at the hospital when she was a baby. What happens when she has a chance to find her mother?

The Baker Street Boys: The Case of the Disappearing Detective

The first in a series of mysteries featuring The Baker Street Boys, as they help Sherlock Holmes solve hsi latest case.

An adventure set in the Victorian music hall.

The Bluest of Blues

A beautiful illustrated biography of photographer and botanist Anna Atkins, the first person to publish a book of photography.

You Wouldn't Want to Be a Victorian Schoolchild

Follow the experiences of Victorian school children in this funny and fascinating book.