The ancient Romans were one of the most advanced and successful civilisations in history. Two thousand years ago, they created a huge and extremely well organised Empire. They built large towns, roads and structures, some of which can still be seen today.

Throughout the Empire, the Roman way of life was followed. People wore Roman clothes, worshipped Roman gods and used Roman currency to buy and trade. Part of this success was because foreigners in conquered lands could become a Roman citizen.

Teach your children about the Romans using our handy topic guide! 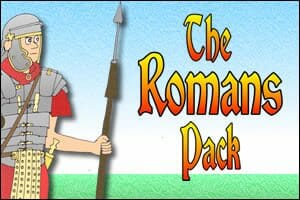 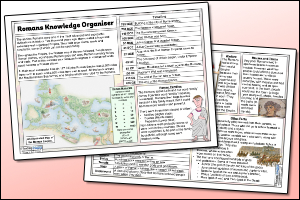 Members of Teaching Packs can download a comprehensive knowledge organiser to accompany this topic. It includes key information that your children can use for reference and research, along with a timeline of key events, a glossary, facts and more.

The Roman Empire and its effect on Britain

Suitable for teaching 7-11s. Historian Bettany Hughes explores what made Britain so attractive to the ancient Romans that they made it a province of their great empire.

Eric visits an archaeological dig and spots something shocking. He travels back to Roman Britain, where he lives the life of a rich kid; eating weird food, having fun with his pet duck and trying to wear a toga without embarrassing himself.

Learn facts about ancient Rome in this fun history video for kids! We will walk through the history of ancient Rome, learning about their government and their culture.

A day in the life of a Roman soldier

This video explains what life was like for a solider in the Roman army.

Suitable for teaching 7-11s. An exploration of life in Roman Britain shown through the eyes of a Roman family.

This book, called The Thieves of Ostia, is the first in Caroline Lawrence’s internationally bestselling Roman Mysteries series.

This it the first in a historical adventure series from Caroline Lawrence, set in Roman Britain during the reign of the evil Emperor Domitian.

How did the Romans shape our world? What was life like for the average Roman? Find out in Eyewitness Ancient Rome and discover all about Romans and their civilization.

What the Romans did for us

This child-friendly guide to the Romans and their impact on life in Britain covers everything from language to food and from roads to toilets!