People have always gathered together to pass on myths and legends. Myths grew as a way of explaining something that could not be easily understood, such as how the sun got into the sky.

Legends tend to grow up around a person or an event. For example, the legend of Robin Hood is thought to have started with the exploits of a real person (or more than one person) which got exaggerated and changed as the story was told and retold.

Teach your children about the myths and legends using our handy topic guide! 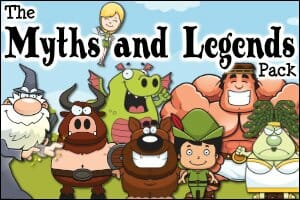 The myth behind the Chinese zodiac

An animation of the story of the Great Race.

The Legend of Giants Causeway

This version of the legend has no dialogue, making it perfect for the children to write their own.

What Is A Myth?

This video uses the myth of Arachne as a stimulus for writing a new myth.

The Horrible Histories team retell the story of the Trojan Wars.

Who Let the Gods Out?

Can Elliot and the Olympian gods save the world?

The hero Gilgamesh learns about friendship in this myth from Ancient Sumer.

This historical adventure is set in the times of the Norse sagas.

Odd and the Frost Giants

The Knight And the Dragon

The knight and dragon know they have to fight, but they are not sure how! A fun read for younger children.

This retelling of sixteen Greek myths is perfect for the classroom.

Myths and tales from Wales, re-told for children.

A collection of myths from China.