Leonardo da Vinci (1452-1519) is considered by many people to be one of the greatest artists who ever lived. During his lifetime, he was famous for his artwork and skill as an engineer: since his death, he has become equally celebrated for his scientific knowledge and his inventions, many of which were hundreds of years ahead of their time.

Da Vinci lived during a period known as the Renaissance when there was a great explosion of learning in Europe. He is often called a “Renaissance Man”, meaning that he was knowledgeable and talented in many different areas.

Teach your children about the Leonardo da Vinco using our handy topic guide! 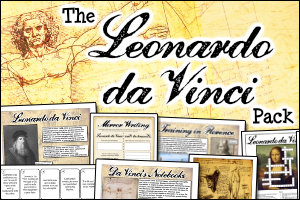 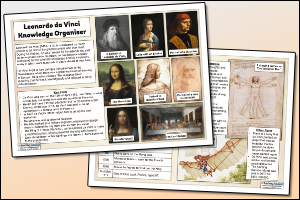 Members of Teaching Packs can download a comprehensive knowledge organiser to accompany this topic. It includes key information that your children can use for reference and research, along with examples of his work, a timeline of his life and more.

This video gives information about some of Leonardo da Vinci’s amazing inventions and how he developed them.

This short video explains how discoveries from more than 500 years ago have pioneered the way we live our lives even today.

This video gives information about da Vinci’s flying machines and how they worked.

Have you ever wondered what would happen If the portrait of the Mona Lisa came to life and started singing? Now you can find out! 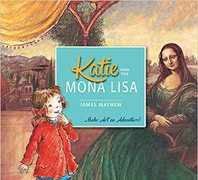 Katie and the Mona Lisa

Join Katie as she steps into one of the most famous paintings in the world for an exciting art adventure!

Leonardo and the Flying Boy

Leonardo and the Flying Boy provides an exciting introduction to the great genius of the Italian Renaissance, with reproductions of Leonardo’s own work.

Who Was Leonardo da Vinci?

This book offers an accessible portrait of a fascinating man who lived at a fascinating time. It also shares lots of information about his ideas and inventions. 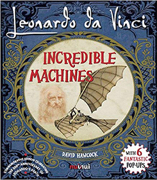 The six magnificent pop-ups in this book recreate some of da Vinci’s marvellous inventions in 3D. Leonardo’s own words also help the reader understand these inventions and explore the world of science.

If you have found a broken link, or if you have any other suggestions to add to this page, please let us know. Thank you!