The summer of 1666 was long, hot and dry. The City of London, with its wooden homes, lit by candles and crammed together in narrow streets, was accustomed to fires. When a blaze broke out in Pudding Lane on the morning of the 2nd of September, no one could have suspected it would lead to such destruction.

The fire changed the face of London in more ways than one.

Teach your children about the Great Fire of London using our handy topic guide! 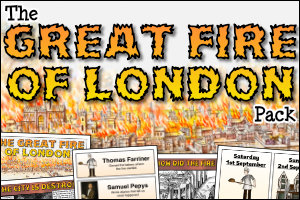 Members of Teaching Packs can download a comprehensive knowledge organiser to accompany this topic. It includes key information that your children can use for reference and research, along with a timeline of events, key people, a glossary of related vocabulary and more.

Explore this amazing 3D representation of 17th century London before The Great Fire.

This song tells the story of the Great Fire of London. It’s ideal for primary / first grade school topic work and singing assemblies, and is available as a digital teachers resource pack.

Young Nick Truelove blames King Charles II for the death of his parents, and vows to get revenge. He forms a special friendship with a young raven and is inspired by its bold behaviour. But the Great Fire and an encounter with the King himself will change Nick’s life for ever.

Vlad and the Great Fire of London

It’s 1666 and Vlad the flea and his friend Boxton the rat, love eating and biting their way around London. But one night in Pudding Lane they are caught up in a fire that threatens to destroy them, along with most of the City of London.

Toby and The Great Fire Of London

Toby has forgotten a delivery for Mr Pepys, but as he sets out across London he sees the sky is full of flames!

You Wouldn't Want to be in the Great Fire of London!

As famous diary-keeper Samuel Pepys, you’ll witness four days and four nights of fire and live to tell the tale. Find out how people lived in the London of 1666, how they coped in the aftermath and all importantly, whodunnit! – or at least who we think dunnit!

The Great Fire of London

To commemorate the 350th anniversary of the fire, powerful and sumptuous drawings from James Weston Lewis brought the events of November 1666 to life in this stunning book.

The Great Fire of London

Find out all about the Great Fire of London, in 1666 – what caused it, how it spread, how it was put out and how the city was rebuilt in its wake.

The Great Fire of London Unclassified

From the outbreak of the fire at a bakery on Pudding lane, to fire fighting techniques and meddling Lord Mayors, The Great Fire Unclassified takes readers on a journey back in time to uncover the true story behind London’s most destructive ever fire.