Millions of years ago, dinosaurs lived on Earth. These fascinating creatures ranged in size from tiny flying creatures, to enormous “titanosaurs” such as Dreadnoughtus, which was 26 metres (85 feet) long! Dinosaurs thrived during three prehistoric periods; the Triassic, Jurassic and Cretaceous.

Some of the animals that lived alongside the dinosaurs can still be found in the world today, such as crocodiles and crabs, but the dinosaurs themselves died out 65 million years ago.

Teach your children about dinosaurs using our handy topic guide! 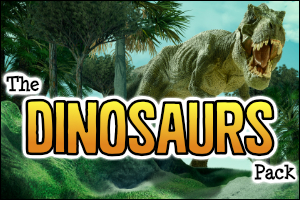 Find out about Diplodocus in this fantastic CBeebies video.

This video gives a brief overview of dinosaurs.

How do dinosaur fossils form?

An animation for the Natural History museum explaining fossil formation.

How dinosaurs footprints get made in solid rock

Join a group of children finding dinosaur footprints at the beach.

Katie and the Dinosaurs

Katie steps back into the world of the dinosaurs at the Natural History Museum.

Dinosaurs and All That Rubbish

It’s difficult for a dinosaur to find a safe place to lay her eggs, in this book for confident readers.

Saturday Night at the Dinosaur Stomp

It’s difficult for a dinosaur to find a safe place to lay her eggs, in this book for confident readers.

When Max writes to the T Rex, the T Rex writes back! Read their letters in this book.

How Do Dinosaurs Say Good Night?

Find out about a dinosaur’s bedtime routine in this charming book.

An incredible pop-up reference book all about dinosaurs.

An incredible pop-up reference book all about dinosaurs.

This engaging lift-the-flap book is perfect for younger children.