Since the beginning of human civilisation, people have built structures to defend themselves. During the Iron Age people protected themselves by fortifying hilltops (known as hill forts). The Great Wall of China began as an enormous earth wall in around 220 BCE. The Romans also built forts and walls, such as Hadrian’s Wall.

The age of castle building began in the Middle Ages, with what we now call Motte and Bailey castles. Castles are large defensive structures that were built to withstand attack.

Teach your children about the castles using our handy topic guide! 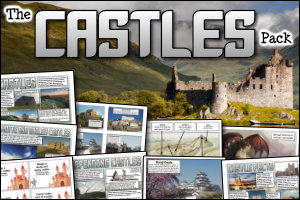 A Mini Guide to Medieval Castles

Watch this short animation to discover how castles developed during the middle ages.

Top 10 Castles around the World

In this Top 10 video, find out about an ancient castle in Egypt. Find out which castle Disneyland modelled its Sleeping Beauty’s castle on! Check out Dracula’s castle in Romania too!

Follow Eric as he discovers what life was like for Norman children, from drinking beer for breakfast and pooing in the castle moat, to learning archery and hawking instead of reading and writing.

Follow young English Heritage Members, Felicity and Olivia, on their visit to Framlingham Castle, in Suffolk, to learn all about the life of a medieval noblewoman. Find out what life was like in a medieval castle, how noblewomen behaved, dressed and learnt good table manners.

Raise the drawbridge and man the battlements because we’re about to besiege you with 25 fortified facts about CASTLES!!

A curious little girl watches the man who guards the last castle in town. Every time she passes by him, she tries to catch his eye. While the other townspeople fear what may be locked up inside the mysterious castle, the girl finally gets up the courage to knock on the door and find out what s really behind the gate.

Tuesdays at the Castle

Tuesdays at Castle Glower are Princess Celie’s favorite days. That’s because on Tuesdays the castle adds a new room, a turret, or sometimes even an entire wing. No one ever knows what the castle will do next, and no one-other than Celie takes the time to map out the new additions.

The Castle in the Mist

Tess and her brother, Max, are sent for the summer to their aunt’s sleepy village in the English countryside. When Tess stumbles upon an old brass key that unlocks an ornately carved gate, she jumps at the chance for adventure. She finds rose gardens, a maze made of hedges, and a boy named William who is just as lonely as she is. But at William’s castle, strange things begin to happen.

The Sword in the Stone

The extraordinary story of a boy called Wart – ignored by everyone except his tutor, Merlyn – who goes on to become King Arthur. When Merlyn the magician comes to tutor Sir Ector’s sons Kay and the Wart, schoolwork suddenly becomes much more fun. After all, who wouldn’t enjoy being turned into a fish, or a badger, or a snake?

Discover who lived in castles, what they ate, where they slept and what they did for fun in this fascinating introduction to medieval life, with lots of examples of castles from around the world.

What Were Castles for?

Discover who built castles, who lived in them, what a joust was and what knights did in this illustrated look at medieval life. Each colourful page is full of fascinating facts about the Middle Ages, from grand feasts to how people survived attacks and sieges.

A fantastic flap book, which takes a humorous yet historically accurate look at life in a Thirteenth Century medieval castle. Inventive embedded flaps on each double-page spread allow children to explore the hidden world of the castle, peeking inside stables, tents, and carriages along the way.

In “Everything Castles”, kids will learn what life behind massive stone walls, moats, and towers was really like. This book delves into an exciting and dramatic history of fierce battles, dark dungeons, secret passageways, lavish banquets, and more, with tips and anecdotes from experts in the field.