An event every year that begins at 12:00 am on day 23 of April, repeating indefinitely

William Shakespeare, also known as the Bard of Avon, was probably the most famous English writer and playwright of all time.

Surprisingly few facts are known about his life and some people think that he may not have written the plays at all! We do know that he was born in April 1564, and the 23rd of April is considered the most likely date for his birthday.

Many English words first appeared in the works of Shakespeare. In fact he was the first to write down over 3000 English words!

He was also the first to write down many common phrases, such as “Elbow room” (in King John), “heart of gold” (in Henry V) and “dead as a doornail” (in Henry VI part II).

Find out about Shakespeare’s life and work in this BBC video. 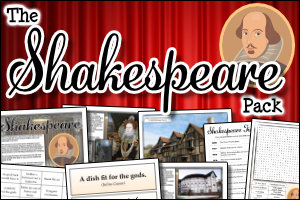